Details of the Play. 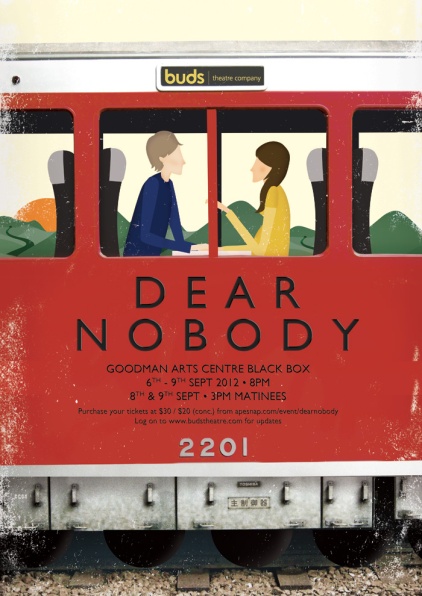 Though cannot be compared how it was like for a mother to meet her baby for the first time, I had never watched any production by Buds Theatre Company before, despite hearing about them for a while.

Buds Theatre Company was established since 2007 with the goal of providing a professional platform for Buds Youth Theatre members (aged from 14 to 24) who will receive free drama training from the company.

The sources which they picked up for this play, ‘Dear Nobody’, is far from nobody as it was adapted from a novel of the same name, written by Berlie Doherty (published in 1991), who had won Carnegie Medal for British children’s books in 1992 and Japanese Sankei Children’s Book Award in 1994 for this book. It had also made shortlisted for several Book Awards, translated into many languages around the world and into several different media such as theatre, radio, television, as well as play scripts for schools, with well-received praises.

The stage version won the Writers Guild of Great Britain Award in 1992.

Curious? What is the story about? You may ask.

Well, it is a rather simple one that may also sound cliché to you but I heard it was the twists and turns of how the story was told, and the skilful portray of each character that had earned the credits. It is about a pair of teenage lovers, who were still pursuing their studies, from the consequences of their young uncontrolled passion, the boy had gotten the girl pregnant! The girl for the sake of the boy’s future, decided to bear all these by herself, broke off with him against his willingness nor told him about the child. Not able to share this secret with anyone, she felt totally isolated and helpless. The only comfort she could find was to write letters to her unborn child during her nine months pregnancy, who she addressed as ‘Nobody’.

Doherty described her book as being essentially about love: “It is about two young people who love each other, but it’s also about family love, the ways in which love can go wrong, how sometimes it makes us do things that aren’t sensible or that hurt people, how sometimes it turns to hate and drives people and families apart”.

With such a strong background like this, accompanied by an engaging storyline with meaningful messages, I could not help but felt very thrilled to see our Singapore’s version of ‘Dear Nobody’. I was wondering how Buds would interpret it.

Directed by Claire Devine and produced by Rebecca Lee, both are seasonal players in the theatre field.

This play will be staging till this Sunday, 9th September at Goodman Arts Centre, Black Box. Ticket at $30 (standard) and $20 (students, senior citizen & NSF).

For students groups of 15 or more, tickets are available at $15.00.
Please contact info@budstheatre.com or call 6468 9851 for more details

The production is open to all ages, with advisory for those under 16.

No harm watching it to find out for yourself.

** I would suggest that you may like to continue reading only after you have caught the play to see how much you might agree with me! (^-<)V

Hoping To See You Grow, Darling.

From the director’s message in the programme, Claire had shared that her team through discussion had felt the need to change the language, context and some of the characters from the original novel in order to suit our Singapore’s environment and our current period better, so we could identify it easier.

I agree with this idea perfectly, as we must go with time to bring the best effect to our audience.

At one glance, the set had the theme of abundant hopes and dreams, like in our adolescence years, lining with balloons in two colours (a good choice as too many colours might cause unnecessary distraction), reminded me of those party days, movable blocks with coating of sprays served in multiple use, they were placed in front of the balloons before us, for the performers to stand or sit on them.

It was the end of a school term, so the first scene started ‘conveniently’ when a group of youngsters threw a party for celebration.

It was the second year of Junior College for Alyssa (by Fervyn Tan) and Dan (by Stanley Seah) – the two main characters, and with all their schoolmates, spending their free time chatting, teasing one another, singing songs along with instruments (spotted their multi-tatents 😉 .

‘Tin Tong’! Door bell rang, It was at the home scene, while the two teenage lovers shared their private time together when Alyssa’s parents were not home.

Next scene, at the mountain, you could tell it by the crickets’ crackling in the background.

I was pretty fancy by how I could know where the scene was taken place by the first sound it hinted before the next change of scene.  Nice sounding, Sangeetha Drai!

The shift of moving lights, going bright and dim, left or right – with expressions, had displayed the mood of the character like a talking soul which added another layer of acting. Moving indeed, Petrina Dawn Tan!

The cast, except for Fervyn and Stanley, the rest of the five members were acting more than one character.

Pleasing performances from the ‘couple’ individually but not together, Fervyn shined more light with her variation of acting while Stanley managed his role fairly, not only they were unprepared parents in the play, but also unprepared lovers to me who needed more chemistry to work thing out – in togetherness.

Sahirrah Safit who acted as Alyssa’s mum and Dan’s ‘affair’, was the most impressive performer among all, it is with no surprise after you had found out her list of experiences in the booklet.  She had carried her characters like a breeze, almost effortlessly; you could feel with her – her pain, her struggles in her monologues.

It was always delighted to see Kelvin John Lim on stage, you could already see the inborn artist in him with the gift of his speaking eyes, I could imagine how Ivan Heng in his rookie years and our new star Shane Mardjuki may look like when Kelvin was in his effeminate shop assistant’s persona. The giggles from the audience seats had proved his fruitful attempt. His portrayal of Dan’s television addict dad was adorable but if he could lower his volume of shouting in one particular scene would be better, as the little black box might not be suitable to be overheated. His third character as Papa (Alyssa’s grandfather) was average, due to the capacity of the role.

Marc Valentine who was Pa (Alyssa’s dad), Eric and Aaron is a born-to-be comedian as it was so nature for him to draw laughter from us. While Marvelina Setiawan as Mama (Alyssa’s grandma), June (Dan’s mother) and Doctor, and Aisha Shaik as Alyssa’s friend, Sam and Nurse were satisfying.

Though I very much wanted to see the changes from original for the better, it had proved me otherwise. The decision to have Alyssa’s breaking the news of her pregnancy to Dan in the middle of her expectancy before their breakup instead of after their breakup in the novel, had diluted the impact. I prefer the novel version whereby the female lead decided to break her silence, by sending all the letters to him, that she had written for their child ‘Nobody’ for the past nine months, just before her delivery. It was one of the greatest climaxes in this awards-winning story.

Moreover, if you want to compare receiving a day-by-day letters which had written for a period of nine months (in the novel) to only one letter (by Dan to Alyssa in this play), which one would you feel more impacted?

In fact, there were many high points in the novel which this play had chosen, but a pity that they were not fully expanded yet.  There were many ‘breaking’ news moments, but were swept by in a rush without leaving us much to feel for the characters nor the situations they were in. It may result of us not having much empathy for them or taking the situations seriously.

Not only the pace of the play must be spaced out, the walking in and out from scene to scene might be good to modify. Instead of causing tension in the play, some scene had created unwanted laughs, for examples, the actor said something then light off, out of the sudden walked out; on the other side another person came in quickly. Or someone fainted then light turned dim, the person could even ‘walk’ away ‘immediately’ after that (right before our vision).

The problem of teenagers having premarital sex is still very relevant in our current society, I was hoping that this play could bring this awareness to the mass. Though not in a preaching form, if could allow the youngsters and their parents to feel a little bit more, to imagine how it would be like if this situation happened to them (in order for them to prevent certain thing or handle certain matter better), to enable them to hear from both sides, then this play had been a success!

It was good that this play had updated their form of communication to whatsapp, messaging text, email and blog but the effective connection between each member was still essential. Overall, every member in this play had played their part well enough, but as a whole I felt the rapport was lacking. Maybe the team can consider to have more ‘makan’ –feasting sessions together at 51 Old Airport Road Food Centre nearby more often! 😉

It was a good effort for Buds to bring ‘Dear Nobody’ on stage; it is always a joy to see the birth of new works in theatre. As parenting is a never-ending journey, I wish to see the young ones under the nurture of Buds to keep growing; maturing and standing strong on their own one day!