This is Hossan Leong’s 4th  HOSSAN LEONG SHOW, but it was my first time catching it!

Never been watching so many comedies in a year, a friend was rather surprised to find out that I went for “Happy Ever Laughter” few months ago as I “don’t seem” like a person who would watch comedy. He was quite right, because I used to watch more “Art house” films and more “abstract” theatre performances in the past, must act as if I know what I was watching mah, then I can call myself ‘UNIQUE” lor!

Hey! That’s very Singaporean, you know? Must be “Uniquely” Singaporean mah! Plus you know hor, life in SINGAPORE is very STRESSFUL, so comedy is the best for us lah!!

And who can tell us the best Singapore jokes, of course, our ‘Singapore Boy’ – Hossan Leong lor! And this time instead of asking Siti Khalijah or Judee Tan to join him, Hossan will be covering the whole show by himself! That’s why it’s called ‘Flying Solo’ mah, tell you beforehand already what! This can also show that HOSSAN LEONG SHOW has ‘grown’ up and Hossan has ‘matured’ to be in the lead role to hold the crowd of thousands by himself! Not easy, many years of hard work does pay!

Being a true-bred Singaporean himself, Hossan knows best how we are like. As the theme of this show is about travelling, Hossan was bringing us with him all around the world, from the plane to the hotel, from the horrible passengers we might met to our stereotyping behaviours in other countries.

He was also being our new reporter whose mission was to widen our lung by laughing a lot, oops no, is to widen our horizon (to be ‘political correct’), by bringing us very current news that happened in Singapore in the recent months (thanks to the resourceful writers –Benjamin ‘Miyagi’ Lee, Jasmine Teo and Hirzi Zulkifile for killing many brain cells in producing the scripts), from the shocking scandals to the high class ‘Diner en Blanc’ event, and the overly mentioned of Trainstopping, which Hossan still managed to broaden our cheeks with giggles in a fresh way. He would also reveal why our National Day Parade was the highest viewers rate this year!

One thing nice about Singaporeans is we know how to laugh at ourselves, sure Hossan was not going to miss that chance by doing so. Indeed, plenty to be laugh about, one thing for sure, our creativity is often challenging, just by naming everything “on the Bay” you know it.

While what you heard might not be new to you, especially in the hype-active social media world we are living. But Hossan knew how to make you laugh heartedly because you really have to see him act out for you in Live!

The cross-dressing of ‘Monica-chng’ (means touch your buttock “摸妳 ka chng” in Hokkien) from Malaysia with her strong Malaysian accent was a success to me, she was the boss of 48’d Spa who dressed in a rather old fashioned way like ‘Ah Lian’ and also acted like one while another creation of Alien in his green suit who was mechanical in reaction because it was not human being, this character might need come time to warm-up as I could see the rapport was not too warm with the audience.

It was absolutely amazing to see how many personas Hossan could put on in every change, while I was so convinced by each role he was in.

I was even more impressed by how quick and accurate he could speak in different accents, and that not all, he can dance, sing and play piano! Wow! He has multi-talents!

I was captivated from the opening, when Hossan sang and danced with the four dancers, Shima Shariff (Choreographer), Bibiana Sherraine Tan, Mina Ellen Kaye and Zarinah Bahtiar (you ladies were wonderful!) As I’m a person who enjoy watching dance, so every short dances in the show were a bonus to me. But the best dance in the show will go to Hossan, for his pole dancing. That’s really ‘breathtaking’ whenever the level got demanding but he had done it almost like a professional pole dancer! Great effort! 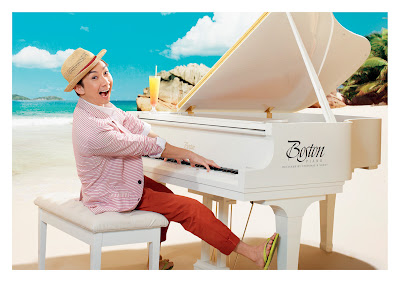 And what thrilled me the most was the classic white grand piano (Boston designed by Steinway & Sons – a portion from the sale of this piano on stage will be donated to The Emma Yong Fund) placed gracefully beautiful in the middle of the stage, while Hossan played on it with its crystal clear tune and he had excited me with his combination of songs with some dance moves which he dedicated them to Shirley. It had proved to me once again that Hossan is indeed a very versatile performer!

The show was filled with entertainment and hilarious moments, I had been laughing away the whole night though not all jokes worked, a few hit and miss. But what I could really see was a very diligent and enthusiastic comedian who had given all his best to make us laugh and in fact he had made it most of the time. For all the tremendous labours he had pumped in, it is very honourable in the name of an artist! And for that, we should be proud to have Hossan Leong as our local acclaimed artist!

Hossan, you will not be flying solo, as I believe for all the nights, all your passengers will be laughing away with you!

P.S: So don’t miss your flight, this show will be flying till 16 September. (Details) Catch the plane now!