School of The Arts (SOTA)

Details of the play. 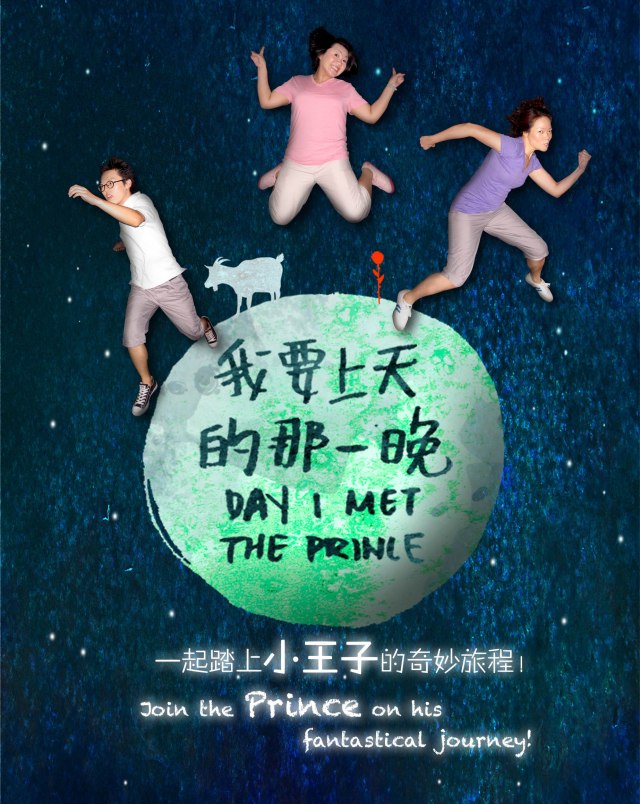 This year is the year that I catch the most theatre performances, used to watch movies and television dramas a lot, but not after experiencing how spontaneous and real theatre is to me, the instant responses from the audience and the interaction with the artistes, is intimate and ‘No Take 2’ as you can never replay the same live performance exactly the same from each time.

That why I’m deeply in love with theatre now.

From all the productions which I had watched so far (just mentioned those in 2012), from overseas productions such as ‘A Chorus Line’, ‘Annie’ to our local ones, this musical ‘Day I Met The Prince’ is the best that I had watched this year till now! This play is the most touching, most enlightening one to me and I was the happiest after watching it!

You never know how a play can change one’s life, this one had – for me.

It was written by our respectable local playwright-director, Kuo Pao Kun (founder of The Theatre Practice) who had passed on 10 years ago, this play was part of his festival in remembrance of him, directed by his daughter, Kuo Jian Hong.

This production is a simple one in a room of about 200 audiences, with only three performers and very few props like a drawing stand, two ladders and a moving backdrop. Their costumes reminded me of one of my favourite childhood games on acting, how I took whatever I had at home to dress myself up, extremely low budget you can say, but full of childlikeness with unlimited creativity as only you will understand but others (especially the ‘adults’! XP) need more ‘imagination’ to ‘guess’ what role you were in. That’s the whole fun of it!

The story was about the day when “I” met the little Prince (from Antoine de Saint-Exupery’s famous novel), together they started their journey in looking for a solution to help Little Prince to protect his rose from being eaten up by his goat but cannot fence or lock them up, because like that both will lose its freedom. As they went on, they came across the arrogant Geographer, the materialist Magic Pill Seller, the very old Granny and the wise Fox.

I like the scene when they met the Magic Pill Seller and the Old Granny the best, the pill seller had invented a kind of pill which can help human beings from having to drink water for a week, in order to save up a lot of ‘unnecessary’ time but on the other hand, the old granny would be fetching a little pail of water from a far distance everyday for her husband, was laughed by the pill seller mercilessly of her ‘stupidity’.

When ‘I’ told granny that her water was tasteless, her reply was “If you fetch the water yourself, you will be able to ‘taste’ it”, how thought-provoking! Indeed, just like if you have never put in hard work on something, you will never able to ‘taste’ how sweet the fruit of labour can bring to you.

Many meaningful metaphors like this were found in this play, which I believe different people would find different part more meaningful to them.

This fable had reminded us not to forget ourselves, nor to follow blindly by the mass and rotate by the fast pace world. We should be the master of our lives, and the advancement of technology should be helping us, not trapping us to be their slaves by being addictive to them instead. The power is in our hands! We must have the courage to be who we are, and not be affected by how others look at us in doing things that only to please them.

Hung Chit Wah, Lv Lin Xuan and Catherine Wong had given their marvellous fun-loving performances to us and they were very good in building rapport with the audience too. Their acting can be gone further to be more loosen-up though I enjoyed seeing them in different roles, impressive! The character that I loved most was the fox, because not easy to act a non-human role, and Catherine had portrayed it very well by her physical movements of the animal.

The three youngster have great potential, though I feel that they must bush up in their singing more (sometimes not able to hear what they sang very clearly and I was seated at the third row), especially Catherine, who also has to work a bit harder in her Chinese pronunciation.

As in every musical, songs and lyrics are the most crucial, Composer Mark Chan and Julian Wong, with lyricist Xiaohan (some lyrics were taken from the original play) had left me satisfying pieces. You know, even after the play, when I ‘read’ the lyric, I could remember that particular melody and that particular scene again. This is what we called a remarkable teamwork! These three roles are all very important and inseparable!

This play has taught me never judge a book by its cover, and never underestimate a good play by how much it has been spent on the production or how prestige the company is. It is about how it has touched our hearts and brings positive energy to us.

After the show, I felt rejuvenated, having the extra courage in venturing ahead what I want to pursue despite the possibility that I  might tease by some of my ‘unrealistic’.

But everyone has their own star as this play had shared in the closing, we are all different individually. Life is short and we can only live once. Why not going after what our passions lie? And having a life that we will never regret?

“Better to have a worthy failure than a mediocre success” said Kuo Pao Kun before.

No matter is from this play or in tribute of our beloved theatre veteran, Mr Kuo’s indomitable spirit in the pursue of his dreams and his contributions in our local theatre history, and all he had inherited to us in the present.

I will never want to forget.